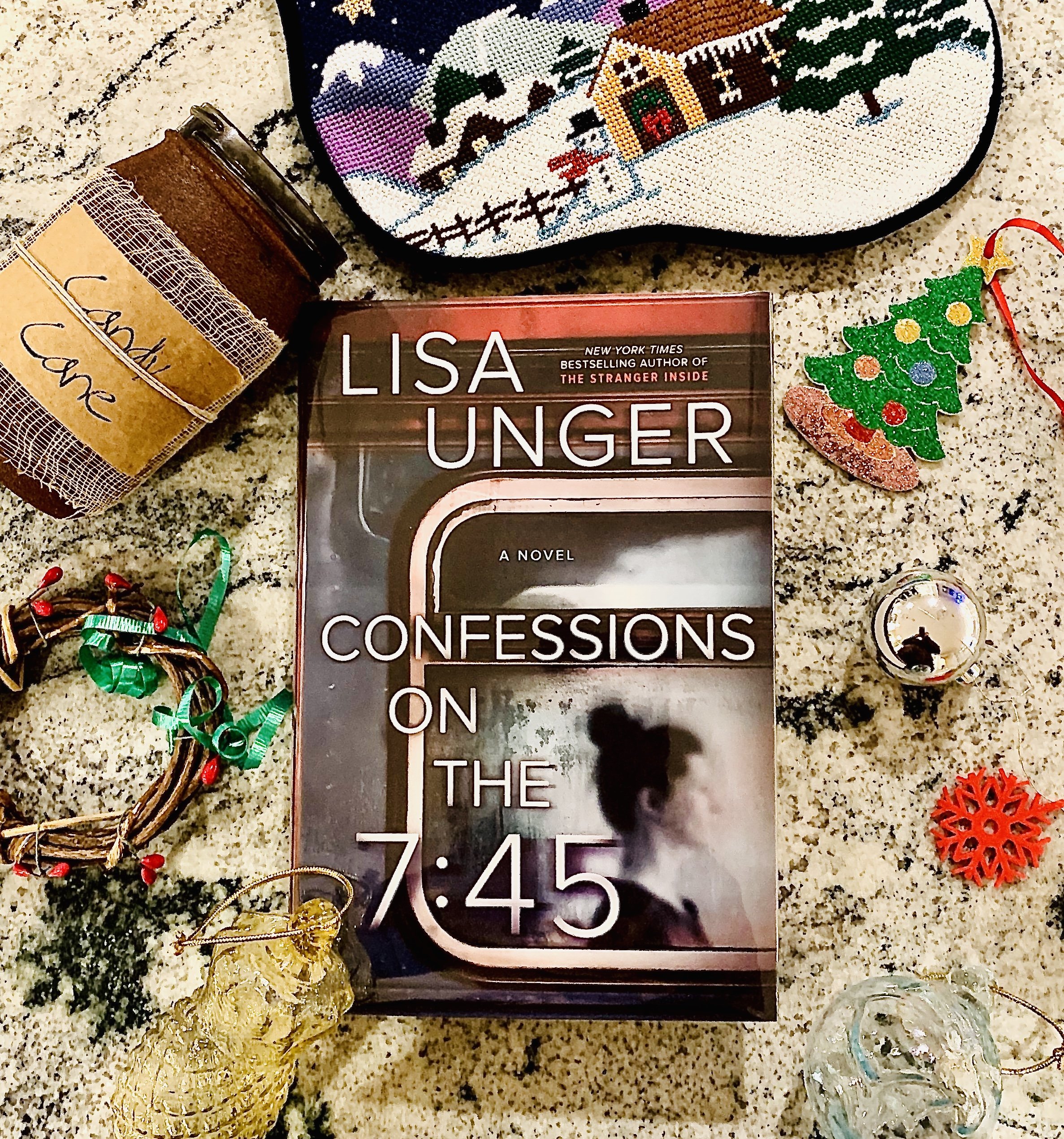 Confessions On The 7:45 by Lisa Unger (Park Row Books)

Have you ever wanted to vent your inner most thoughts to a complete stranger?  Marital problems (sorry, I know you had a few), work issues, family, etc.  I mean, it’s kind of like unloading the contents of your brain onto a therapist, except free of charge.  And let’s face it, some people just have that “I will listen to you free of judgement, please come talk to me” kind of look.  Am I right?  I would imagine that most random conversations with strangers are harmless and simply part of being human.  But what if you were unaware that a stranger you just chatted up a storm with knows EVERYTHING about you?   Hmmmmmm!  I do believe we have a story here.  Confessions On The 7:45 by Lisa Unger begins with a nanny-cam gone wild, a train ride home from work, and all the dirty little secrets that were shared.  Lets see what happens when the train pulls into the station, shall we.

“But when she did miss the train that night-she didn’t even bother trying to get to the station-it created a space that hadn’t been there before.  Just a little over two hours between the 5:40, which she normally took, and the 7:45, which she intended to catch after finishing up a few things at the office.  In that gap, she could feel herself expand.  She wasn’t working.  She wasn’t mothering.  She just was.  She could think.  And truth be told, Selena did have some things she needed to think about.  These things were a white noise in the back of her mind.”

Selina’s day doesn’t exactly end on a high note.  After she misses her train home from work, she kills some time at the office until the next train arrives.  As she scrolls around her computer, she decides to check out the nanny cameras in her house, including the one she secretly moved to her boys’ playroom.   When she turns it on she is greeted with live footage of her husband all up “and in” I might add, the nanny’s business.  Can Selina’s day get any worse?  Cheating is nothing new for her.  She has fallen victim to her husband’s indiscretions once before, but this time….it really hits a nerve.  She makes her 7:45 train and begins talking with a woman named Martha sitting next to her.  Martha senses Selina’s bad day and the two begin to talk.  It was effortless sharing with one another.  Martha revealed that she was having an affair with her boss, while Selina hinted at her husband’s infidelities.  The ladies part ways after they arrive at their respective destinations and Selina heads home to her beloved sons and pig of a husband.  The next morning though, Selina’s nanny doesn’t show up for work.  She is eventually reported missing and presumed murdered.  Did her husband kill the nanny?  Do the police know about the nanny cameras?  And why does Martha suddenly call to hang out when they never even exchanged phone numbers???  EEK….I wish I could tell you more, but the rest is up to you to discover.

Confessions On The 7:45 was filled with instant drama. Once Selina missed her train and the nanny-cam started rolling, I was in!! Unger’s book is filled with incredibly flawed characters with hidden pasts and secrets oozing out of their pores.  The pacing was perfect, the plot was well developed and the suspense was on point. The storylines hop around a bit in the book, but Unger did a fantastic job knitting it all together.  Cheating husbands with a dash of mysterious strangers and a splash of deception make a toxic cocktail.  Throw in a few dead bodies, a couple of con artists and twists to catch you off guard, and Confessions On The 7:45 is your next stiff drink.  Bottoms up!

I hope you enjoy this thrilling ride…choo choo!!!!

P.S. Lisa Unger is the author of 19 books and counting.  Be sure to check her out RIGHT HERE!