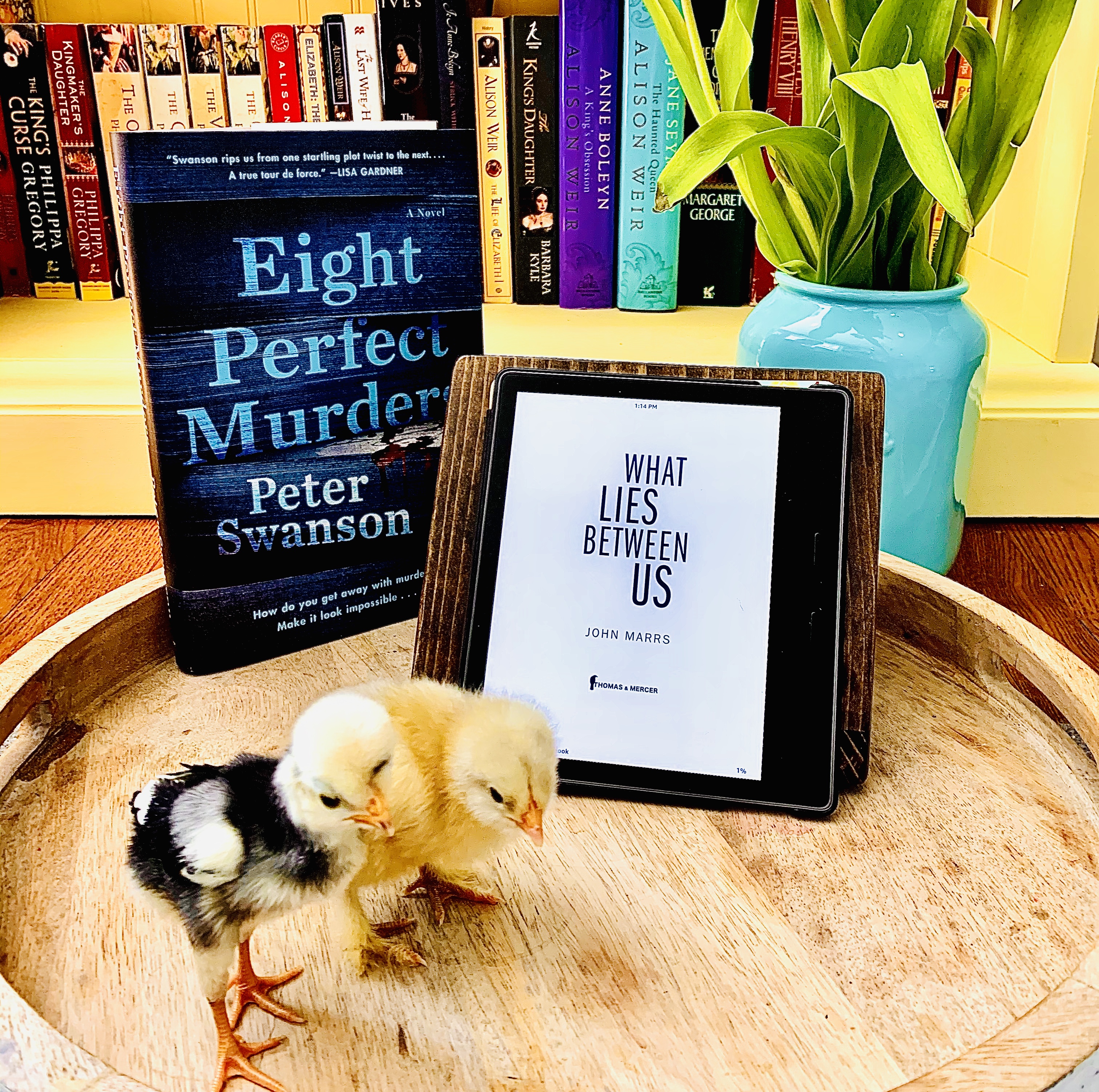 What Lies Between Us by John Marrs (Thomas & Mercer)

MURDER! Is it madness, or maybe, just maybe, a curated act that offers on a silver platter, a mystery to be solved? Today I am talking about Peter Swanson’s latest book, Eight Perfect Murders, and John Marrs’ new book, What Lies Between Us. While Swanson’s book pays tribute to eight brilliant fictional murder mystery novels, Marrs’ book takes a deep dive into a strained (ok…demented) mother-daughter relationship…murder included! Though they are two completely different reads, they both invite you on a rollercoaster of a ride that will surely make your heart skip a beat. Beware…sharp and twisty turns ahead!

Let’s start with Eight Perfect Murders. According to Swanson’s protagonist, Malcolm Kershaw, it is quite possible to commit the perfect murder.  In fact, Kershaw published a blog post for his bookstore a few years ago citing eight works of fiction that in his opinion, showcase the most seamless and unsolvable murder mysteries to date. The title of his post, “Eight Perfect Murders”, included Agatha Christie’s A. B. C. Murders, Patricia Highsmith’s Strangers on a Train, Ira Levin’s Death Trap, A. A. Milne’s Red House Mystery, Anthony Berkeley Cox’s Malice Aforethought, James M. Cain’s Double Indemnity, John D. Macdonald’s The Drowner, and Donna Tartt’s A Secret History. Lo and behold, his blog post comes back to haunt him when the FBI contacts him about a string of recent murders and their possible links to the eight books he wrote about.  As Malcolm shares his reasonings with the FBI, he also plays the part of a sleuth behind their back, only to discover more than he bargained for. Is it truly possible to mimic a murder found between the pages of a book?  Plan on relishing this literary dream.  Swanson’s bookish tale is the perfect bedtime story for every crime fiction lover out there. While a local bookstore and the smell of old books set an atmospheric backdrop for the inner bibliophile in you, literary deaths are brewing on every page of Swanson’s book.  He does a phenomenal job intertwining fictional works from the past with present-day crime.  The pages are oozing with secrets, lies, and memories from a time long ago. Sink deep into your couch for this one.  You won’t move until you finish!

Switching gears ever so slightly, John Marrs’ new book, What Lies Between Us takes a strenuous mother-daughter relationship to the next level. Maggie has always protected her daughter Nina, no matter the cost.  From birth, through a very trying adolescence, Maggie has done everything in her power to shield her daughter from the cruel and unusual world she lives in.  So why…why, is Maggie chained up in the attic bedroom of her adult daughter’s home?  This my friend, is a question I cannot answer.  How could I, without spoiling the biggest psychological thriller out there. I will tell you this…Marrs’ book is absolutely bonkers!  And I mean that as a compliment. I was hot glued to my seat reading the pages of this book faster than I could turn them. Maggie and her daughter Nina not only narrate the story in alternating chapters but using dual timelines. The past and the present from both narrators slowly merge together offering an ending that will blow your mind.  Their individual stories are oh so twisted and completely insane. I had to actually pick my jaw up off the floor several times during this book. There is absolutely no getting off this ride until the very end.  Buckle up!  You will need to read this in one sitting!

Until Next time Mr. H.

P.S. If you have not read or are planning on reading any of the eight books mentioned in Swanson’s book and The Murder of Roger Ackroyd by Agatha Christie, be forewarned.  There are major spoilers.

***The chick featured in the photograph is Eleanor. She was a week old when this picture was taken. She is a White Crested Black Polish Bantam. ❤️❤️❤️

We use cookies to ensure that we give you the best experience on our website. If you continue to use this site we will assume that you are happy with it.Ok