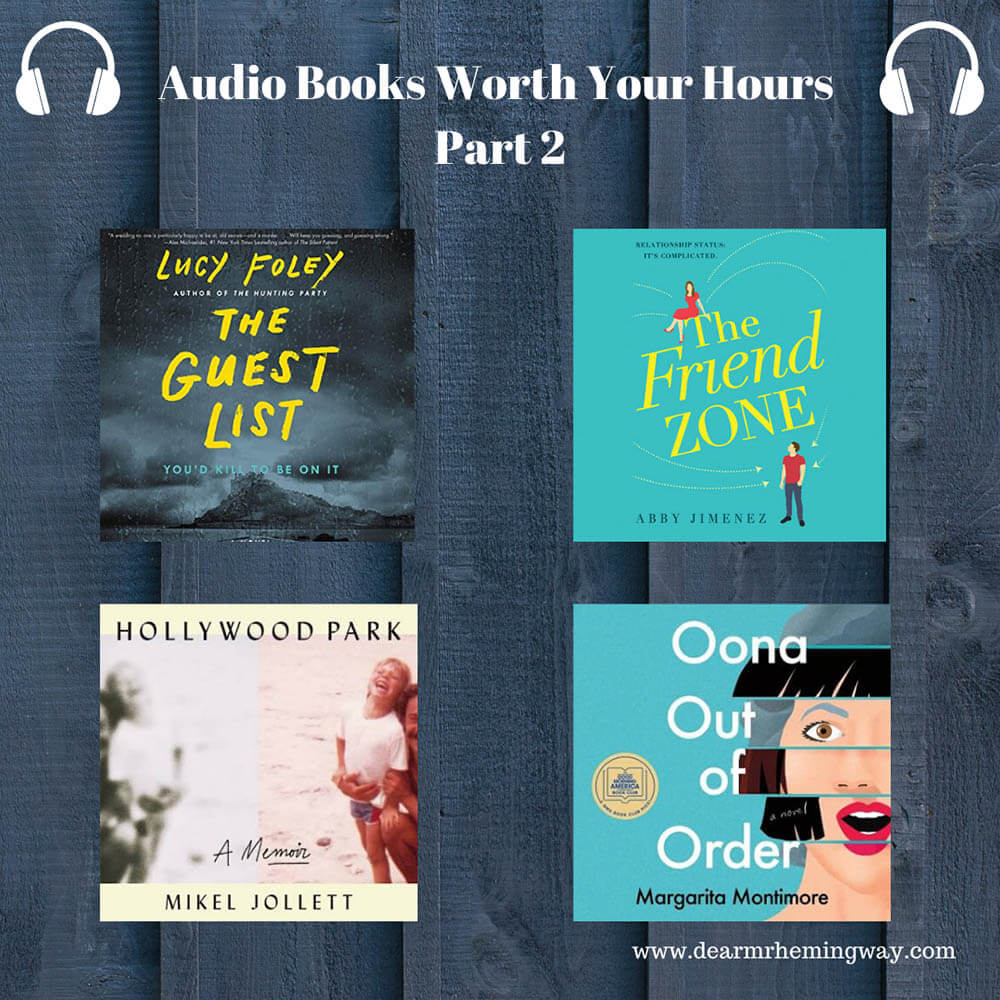 Tales From An Audio Book Junkie

I have written to you about my love of audiobooks before. In my days, they were actually referred to as “books on tape”. I still catch myself saying that from time to time…especially when my kids look at me like I am speaking a foreign language. Anyway, do you know how many times I have fallen asleep listening to your book, The Old Man and the Sea? Well, it feels like a thousand. As much as I adore that particular book of yours, it is my darling husband that plays it over and over again as he drifts off to sleep. Every now and then he throws on the audio version of your book, A Moveable Feast. I have no problem listening to that book over and over again. Falling asleep to your words from this story ensures my dreams will be filled with Parisian streets, salty oysters, and crisp white wine. Anyway, I digress. Today I am sharing some books that I found to be quite entertaining on audio. A little bit of romance, friendship, mystery, memoir, and time travel is coming your way today. Grab your headphones and hit play! Let the listening begin!

P.S. If you are looking for a way to listen to your books while supporting ANY participating local bookstore, check out Libro.FM. Feel free you use my REFERRAL LINK to get your first month free. Any member can share their referral code. Click on the book pics below to take you directly to their info page.

Abby Jimenez’s book, The Friend Zone, came out last year, and I JUST recently listened to it. I am actually pumped that I was was fashionably late to this fabulous book party. This book was the perfect feel good, pick me up during this uncertain time. Not only did I get to spend the night in bed reading this warm and fuzzy tale, I acquired a new book boyfriend who goes by the name of Josh. Married or not, you can never have too many book boyfriends 😂😂😂. Also, if you end up liking this book, the sequel just came out. It’s called The Happily Ever Playlist.

“Kristen Peterson doesn’t do drama, will fight to the death for her friends, and has no room in her life for guys who just don’t get her. She’s also keeping a big secret: facing a medically necessary procedure that will make it impossible for her to have children.

Planning her best friend’s wedding is bittersweet for Kristen — especially when she meets the best man, Josh Copeland. He’s funny, sexy, never offended by her mile-wide streak of sarcasm, and always one chicken enchilada ahead of her hangry. Even her dog, Stuntman Mike, adores him. The only catch: Josh wants a big family someday. Kristen knows he’d be better off with someone else, but as their attraction grows, it’s harder and harder to keep him at arm’s length.”

⁣WOW! I’m embarrassed to say that I did not know who Mikel Jollett was or for that matter, who his band, The Airborne Toxic Event was. Well, after listening to his brand new memoir, Hollywood Park I have a pretty good sense of who this writer and musician is! Mikel Jollett narrates his profound journey from his early childhood In the 70’s to present day with an honesty that spares no details! From his early days living in a cult with his family to his unsettled adolescence and young adulthood, Jollett’s journey was rocky to say the very least. He effortlessly brings his readers into his world of family love, loyalty and survival by exploring the intimate most details from his relationship with his parents and older brother. His writing is stunning and his story is absolutely unforgettable. His emotional memoir will no doubt stir your soul and fill your heart with love. ⁣Bonus……Jollett narrates his audio book.

“So begins Hollywood Park, Mikel Jollett’s remarkable memoir. His story opens in an experimental commune in California, which later morphed into the Church of Synanon, one of the country’s most infamous and dangerous cults. Per the leader’s mandate, all children, including Jollett and his older brother, were separated from their parents when they were six months old, and handed over to the cult’s “School.” After spending years in what was essentially an orphanage, Mikel escaped the cult one morning with his mother and older brother. But in many ways, life outside Synanon was even harder and more erratic.

In his raw, poetic and powerful voice, Jollett portrays a childhood filled with abject poverty, trauma, emotional abuse, delinquency and the lure of drugs and alcohol. Raised by a clinically depressed mother, tormented by his angry older brother, subjected to the unpredictability of troubled step-fathers and longing for contact with his father, a former heroin addict and ex-con, Jollett slowly, often painfully, builds a life that leads him to Stanford University and, eventually, to finding his voice as a writer and musician.”

The Guest List by Lucy Foley is absolutely wonderful on audio. Who wouldn’t want to attend a wedding with friends and family on a small Irish island? The privacy from the outside world, the weekend escape from everyday life, one big hurrah with friends and family to tide you over until someone else’s big day. Sounds like the perfect weekend. The narrators’ Irish accents and the icy cold ocean air will make you feel like you are actually on this Emerald Island. There is a creepy vibe while the bride and groom and all their guests get ready for the ceremony. Family drama and dark secrets from their pasts give this wedding day a very unsettling vibe. Throw in some blood and a dead body and you have one heck of celebration. Foley’s slow burn mystery is an atmospheric treat.

On an island off the coast of Ireland, guests gather to celebrate two people joining their lives together as one. The groom: handsome and charming, a rising television star. The bride: smart and ambitious, a magazine publisher. It’s a wedding for a magazine, or for a celebrity: the designer dress, the remote location, the luxe party favors, the boutique whiskey. The cell phone service may be spotty and the waves may be rough, but every detail has been expertly planned and will be expertly executed.

But perfection is for plans, and people are all too human. As the champagne is popped and the festivities begin, resentments and petty jealousies begin to mingle with the reminiscences and well wishes. The groomsmen begin the drinking game from their school days. The bridesmaid not-so-accidentally ruins her dress. The bride’s oldest (male) friend gives an uncomfortably caring toast.

And then someone turns up dead. Who didn’t wish the happy couple well? And perhaps more important, why?”

When I think about time travel, my mind instantly goes to The Magic Treehouse or Outlander. In Margarita Montimore’s new book, Oona Lockhart travels to a different time in her life every New Year’s Eve for one year. Can you even imagine revisiting yourself in the past or for that matter, meeting yourself in the future? If given the chance, would you alter your past knowing that in turn, it could change the future? Montimore offers her readers this, and so much more in her unique tale. Oona Out of Order definitely made me think. Between the pages of this compelling read are funny and light hearted moments coupled with self reflection and a giant splash of pop culture (80s and 90s anyone?). Do not think too deeply about the ins and outs of time travel. Simply enjoy Oona’s wild ride!

“It’s New Year’s Eve 1982, and Oona Lockhart has her whole life before her. At the stroke of midnight she will turn nineteen, and the year ahead promises to be one of consequence. Should she go to London to study economics, or remain at home in Brooklyn to pursue her passion for music and be with her boyfriend? As the countdown to the New Year begins, Oona faints and awakens thirty-two years in the future in her fifty-one-year-old body. Greeted by a friendly stranger in a beautiful house she’s told is her own, Oona learns that with each passing year she will leap to another age at random. And so begins Oona Out of Order...

Hopping through decades, pop culture fads, and much-needed stock tips, Oona is still a young woman on the inside but ever-changing on the outside. Who will she be next year? Philanthropist? Club Kid? World traveler? Wife to a man she’s never met? Surprising, magical, and heart-wrenching, Margarita Montimore has crafted an unforgettable story about the burdens of time, the endurance of love, and the power of family.”

The Boyfriend Project by Farrah Rochon is an all-star treat. Here is my favorite quote….“If sexy and adorable had a baby together, the result would be Daniel Collins.” SOLD! Farrah’s book is filled with sass, class, and a whole lot of smarts… did I mention Daniel Collins??? Women lifting each other up, staying true to yourself, and a tall, dark and handsome man lingering in the background….sign yourself up for this one. Such a perfect summertime listen.

“Samiah Brooks never thought she would be “that” girl. But a live tweet of a horrific date just revealed the painful truth: she’s been catfished by a three-timing jerk of a boyfriend. Suddenly Samiah-along with his two other “girlfriends,” London and Taylor-have gone viral online. Now the three new besties are making a pact to spend the next six months investing in themselves. No men and no dating.

For once Samiah is putting herself first, and that includes finally developing the app she’s always dreamed of creating. Which is the exact moment she meets the deliciously sexy Daniel Collins at work.What are the chances?But is Daniel really boyfriend material or is he maybe just a little too good to be true?