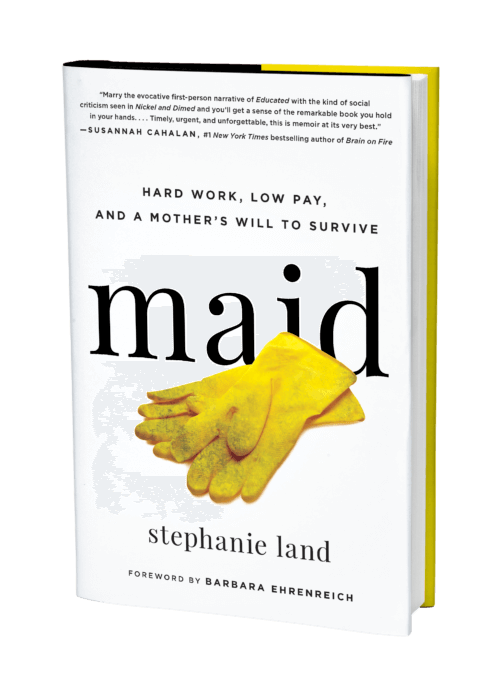 Maid: Hard Work, Low Pay, and a Mother’s Will to Survive By Stephanie Land 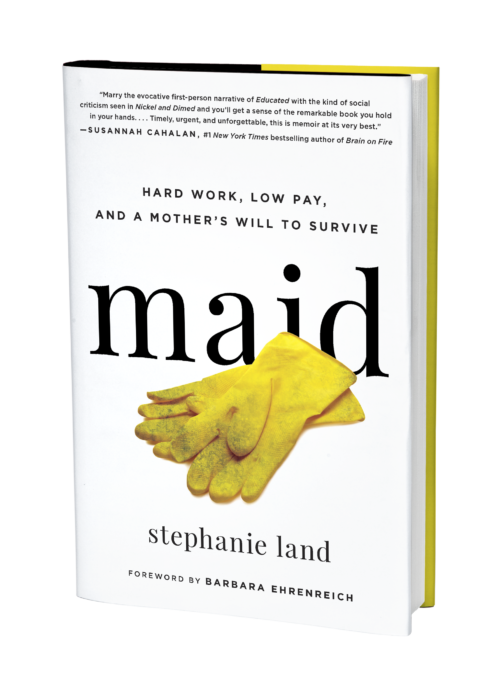 Oh, how I love a good memoir, especially one that I can read in just one sitting. Maid, by Stephanie Land, will have you glued to your seat until the very last page. Land shares her experience as a single mom who lived in poverty while cleaning houses for a living. She is smart, hardworking, and determined to make ends meet for her and her daughter.  In her book, she poignantly recounts her daily struggles to thrive in impoverished conditions. Her story is one of survival. It is filled with truth, grit, and everything in between. I encourage readers to read her story and share it.  There is much conversation to be had.

Stephanie Land’s dream was to become a writer.  Her plans shifted when she discovered she was pregnant.  Despite the challenges she encountered with her baby’s father, Land was committed to having her baby and raising her on her own.   She documents her journey as a single mom living in homeless shelters and various government-supported housing. She works as a cleaning lady, while taking classes at night to get her bachelor’s degree.  Her work is long and grueling with low pay. Her only respite is when her daughter goes to her father’s house on some weekends. She relies on food stamps and other programs to keep her family afloat. Living penny to penny, she is trapped in a system that provides no incentives to make or save money.  She is stuck on the poverty wheel that just keeps spinning. By not working enough, Land can’t afford to live or qualify for assistance. By making even slightly more money, her childcare voucher and rent subsidy are threatened. Her life is a complete catch 22 with no way to break out.

Stephanie Land’s book is her personal account of what poverty looks like in America.   She debunks common stereotypes of people living in the lowest socioeconomic class. She makes it very clear that not all poor people are stupid, lazy, and living off the system for kicks and giggles.  Land gives her readers a taste of the social stigma felt as a recipient of social welfare programs. She makes visible how quick society was to judge how she spent her money and how she spent her time.  She shows you behind the scenes of being a cleaning lady and how often times she didn’t feel like she was a valued human being in her client’s homes, but instead, just a faceless nobody cleaning the unimaginable for such small pay.  Most importantly, Land invites readers into her emotional world of parenting alone under undesirable circumstances.

Stephanie Land’s book was a pleasure to read.  Her writing is simple and easy to follow. Her words flow smoothly, allowing the pages to practically turn themselves. Though this is her story and her story alone, it shines light on the frustration of living in poverty and the flaws in our welfare system.  I believe in hearing people’s stories. Passing judgment is easy. It’s truly listening to someone’s words that proves to be more difficult. The saying, “ Until you walk a mile in someone else’s shoes”, holds true with this story. I urge readers to read Maid by Stephanie Land.  I hope her story continues to build compassion and understanding in others.

Readers will most certainly have plenty to talk about.

P.S.  Did you know people generally whistle when they are happy or when they are trying to get their mind off something they are doing that they do not want to be doing (i.e cleaning)?  Whistling is oddly a male dominated activity as well. Most whistlers do not even realize that they are often times producing sounds that are totally annoying to the people around them.  Lastly, the song, “Whistle While You Work” was written in 1937 for non other than the Disney movie…..The Seven Dwarfs.  I wonder if Stephanie Land can whistle????

Click here to buy Maid: Hard Work, Low Pay, and a Mother’s Will to Survive By Stephanie Land

We use cookies to ensure that we give you the best experience on our website. If you continue to use this site we will assume that you are happy with it.Ok