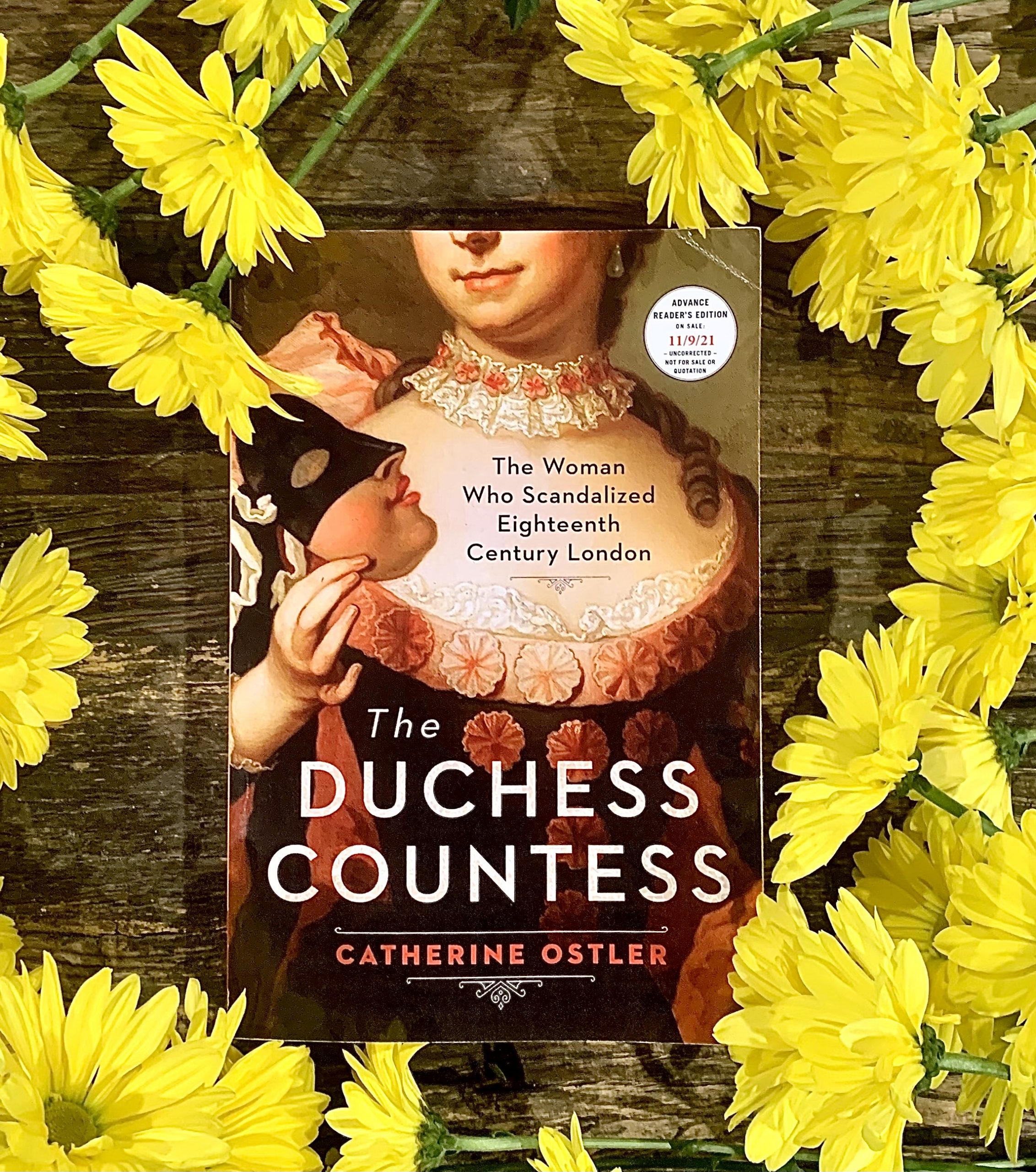 Today I am wishing a VERY Happy Pub Day to The Duchess Countess by Catherine Ostler!!!  To say I was a happy camper reading this book would be an understatement.  Give me anything related to a scandal, royal courts, and an adventurous woman during any century prior to cell phones or electronics and I am in heaven.  This magnetic biography was my first introduction to  Elizabeth Chudleigh and certainly won’t be my last. Let me share with you why I am officially obsessed with this beguiling woman from the Georgian era.

How I have never heard of Elizabeth Chudleigh until now is beyond me. While America was on the brink of Independence in 1776, the British papers were not filled with reports of this monumental change, but instead were dripping in stories of Chudleigh’s trial at Westminster where she was found guilty of bigamy. Ostler shares this piece of history with her readers then takes us through Chudleigh’s life beginning with her humble start. It is not long before she reveals her secret marriage to Augustus Hervey followed by her time at court as maid of honor to the Princess of Wales and her second marriage to Evelyn Pierrepont, the 2nd Duke of Kingston.  Osler’s book is chock-full of facts, intricacies, and then some piecing together Chudleigh’s two marriages and the dispute of their validity.  Her unabridged biography takes readers on Chudleigh’s never-ending escapades in England, France, and even Russia leaving no stone unturned. She brilliantly highlights why Chudleigh’s life was so controversial and who was impacted by her endeavors.

Ostler’s book has become my new obsession. Meeting Elizabeth Chudleigh for the first time has left me with a hankering to analyze and discuss her two marriages, her inheritance, and every element in-between. I am still in awe over her trial and the spectacle it was. It is crazy that it cost just as much or even more than a queen’s coronation and that it was an actual ticketed event that women and men alike dressed to the nines to attend. Osler’s book began very fact-driven but quickly read more like historical fiction than biography.  I was swept away by the Georgian era and the exquisite details of all the hierarchies, fashion, and laws of the lands.   Chudleigh’s ability to fight for a place in society and re-invent herself after every fall was astonishing. There was so much transgression, so much hearsay that deciphering what was true and what was false kept me on the edge of my seat. I predict my own ceaseless adventure going down the Elizabeth Chudleigh rabbit hole.

I love how Ostler brought to life this truly forgotten woman from eighteenth-century London. Her work is well researched and truly was a delight to read. This is the perfect cup of tea for all the  Georgian era and Regency era fans out there like me. Not only am I looking forward to Bridgerton Season two coming out,  but I am now officially dreaming about Elizabeth Chudleigh coming to a big screen…a historical fiction mini-series is what I so desire. Maybe Ostler can help make that happen!!!!

P.S. If you like this time period, guess what??? The Regency era overlaps with it and had some fabulous cocktails to boot. Check out this book for some delicious concoctions!