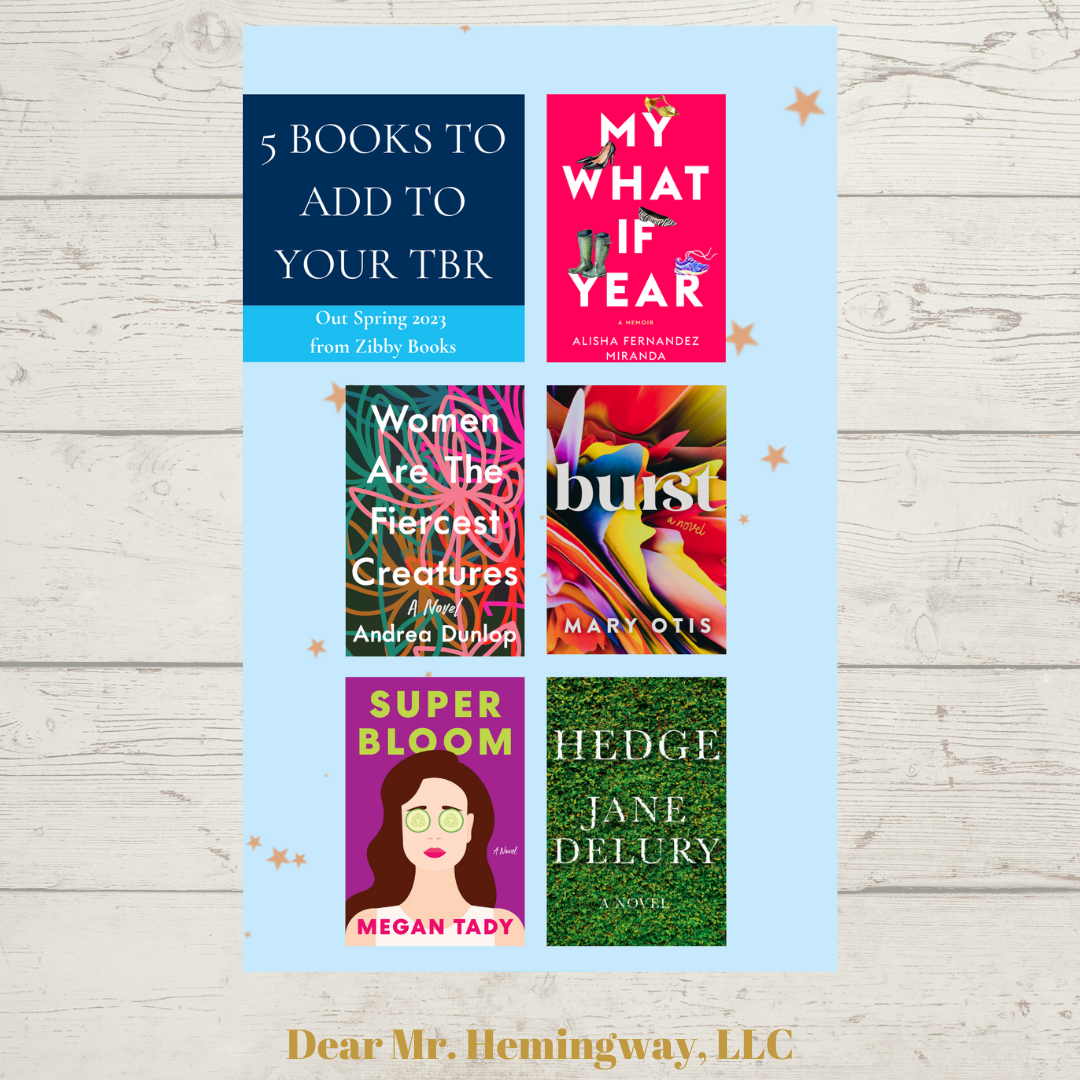 Happy Monday! As you may already know, I am a proud ZIBBY BOOKS Book Ambassador. ZIBBY BOOKS is a beautiful publishing home for fiction and memoir founded by the lovely Zibby Owens. Today I am giving you a sneak peek at some of the GORGEOUS books coming your way in Spring 2023. I can not wait to get my hands on these beauties. Be sure to get your pre-orders in. They are so helpful to the talented authors.

“An exuberant, hilarious memoir about a woman who pauses her successful career for a year and explores the “What If” jobs of her dreams.

On the cusp of turning forty, Alisha Fernandez Miranda has climbed to the peak of personal and professional success, but at a price; she’s overworked and exhausted.

Bravely, Miranda decides to give herself a break, temporarily pausing her stressful career as the CEO of her own consulting firm. With the tentative blessing of her husband and eight-year-old twins, she leaves her home in London to spend one year exploring the dream jobs of her youth, seeking answers to the question, “What If?”

What follows is a spirited and hilarious journey for Alisha – and the reader. Contending with her lack of experience (and the onset of a global pandemic), Alisha gofers for two high-profile Broadway productions (and nearly tramples Stephan Sondheim), attempts to master a fitness regimen called Voga (a cross between yoga and “voguing”), feigns confidence while handling multi-million-dollar artwork at Christie’s, and literally sets her shirt on fire while serving rack of lamb in a posh hotel on Scotland’s remote Isle of Skye. Her experiences are at once challenging and humbling, and push the boundaries of what Alisha thought she was physically, mentally, and emotionally capable of. Alisha’s “What If” year reveals that she can achieve success on her own terms by embodying the spirit of the intern: never stop learning, be flexible, and understand that failure is a prerequisite for growth.

For anyone who’s ever felt stuck in a rut, My What If Year proves that it’s never too late to say yes to second chances and explore the roads untraveled throughout your life.”

“In this wildly addictive novel, two overlooked single moms take on the manipulative, charming tech CEO who wrote them out of history. Set in Seattle, this suspenseful, complex novel follows the story of two women who have been erased from a billion-dollar tech company by its founder. As the company prepares to go public, the damning secret behind it threatens to ruin everything, including the futures of three intertwined families. Anna Sarnoff is still reeling from her quickie divorce from tech wunderkind Jake Sarnoff. Forced out of the company she helped Jake build, Anna is trying to pick up the pieces of her life, navigating the waters of solo parenting their two teenage boys and adapting to her new role of ex-wife. To make things more complicated, Jake seems to want her back…and she’s tempted to say yes. Across town, the brilliant and striking Samanta Flores-Walsh, Jake’s college girlfriend, is busy raising her daughter and running a thriving yoga studio. While their relationship ended years ago, unanswered questions from their time together continue to gnaw at her, and when she learns that Jake is planning to take his billion dollar company public, she starts to wonder if perhaps it isn’t too late for justice. And then there’s Jake’s much younger new wife, Jessica, struggling to stay afloat as a new mom while her high-profile husband grows increasingly absent. The three women’s lives grow entangled as long-held secrets are forced to the surface, threatening to destroy their families. Written with razor-sharp intelligence and heart, Women Are The Fiercest Creatures is a searing look at the complexities of family and the obstacles women navigate in every aspect of their existence.”

“If only there was a spa treatment for heartbreak. In this sparkling, heart-warming debut set at a luxury Vermont spa, massage therapist Joan Johnston is wallowing in grief over the accidental death of her boyfriend, Samuel, and it’s now seriously jeopardizing her job and her friendships. Will she ever be able to move on? Enter Carmen Bronze, a hotheaded bestselling romance novelist and the most demanding massage client Joan’s ever faced. When Carmen offers Joan a chance to pay down her debt and save her job, it’s hard to say no–even though it means funneling Carmen inside dirt on the spa for her next novel. The task unexpectedly reawakens a dormant talent in Joan, and she’s irresistibly drawn to writing her own romance novel based on her relationship with Samuel that stretches into the bright future they didn’t get to share. Writing proves to be the therapy Joan desperately needs, and her heart begins to open to new romance… and even the possibility of becoming a successful author herself. But none of this is easy, not with a lunatic like Carmen breathing down her neck and threatening to steal Joan’s manuscript. A heartfelt, hilarious look at taking second chances, in life and in love, Tady’s uplifting debut will have readers rooting for Joan on every page–and laughing out loud at her one-of-a-kind wit.”

“An unforgettable story about the conflicts of motherhood and female desire from award-winning author Jane Delury. Maud is a brilliant garden historian and devoted mom to daughters Ella and Louise. She’s accepted a dreamy summer job across the country from their family’s Bay Area home, restoring the gardens of historic Montgomery Place. The problem: Her husband Peter, simmering with resentment over their trial separation, will barely speak to her. That summer, reveling in her temporary independence, Maud strikes a friendship with project archeologist Gabriel Crews, sharing dinners with him after days of satisfying work. As their relationship grows more intimate, Maud dares to imagine a future outside of her stifling marriage to Peter. But when 13-year-old Ella and 8-year-old Louise join her to spend a few weeks at Montgomery Place, Maud is caught between her desire to be with Gabriel and the intensity of Ella’s dark moods. Is Ella acting out because she senses that Maud and Gabriel have fallen in love? What happens next is a seismic shock that will continue to reverberate back home in the Bay Area and will ultimately upend Maud’s life, as well as the lives of everyone she cares about. Deeply moving and impossible to put down, Hedge is an unforgettable portrait of a woman’s longing to be a good mother while still answering the call of her formidable soul and mind.”