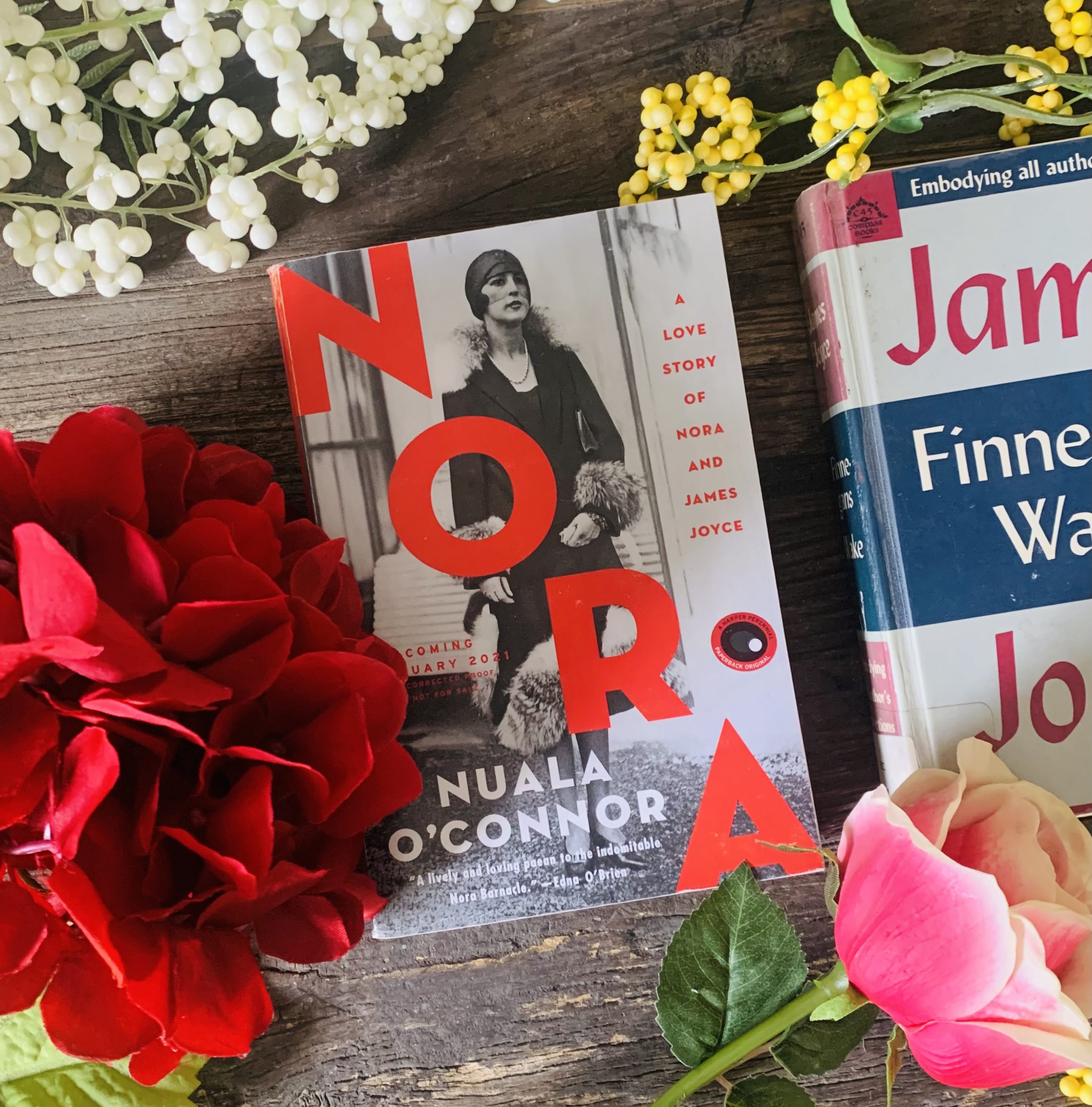 Jim Joyce is my love, but he’s also a bother to my heart and a sore conundrum to my mind.  I don’t think the day will come when he’ll grow to be the man he should be.

There is something about you writers from the early 20th century that fascinates me. Especially all of your juicy personal lives.  I obviously started this journey with you and your four wives, then quickly became obsessed with F.Scott Fitzgerald and his wife Zelda (click here to see my favorite book about these guys).  Today, I can’t get enough of Irish writer James Joyce and the lovely Nora Barnacle. The love, the lust, the writing, the atmosphere…I need to know it all.  Nora:  A Love Story of Nora and James Joyce by Nuala O’Connor is my latest historical fiction read.  O’Connor’s book opened my eyes to a whole new woman for me to explore.  Let’s take a look.

James Joyce first met his future wife, Nora Barnacle on June 16, 1904, in Dublin.  Their first encounter was definitely memorable and a little on the “risque” side.  I’ll let the first two pages of O’Connor’s book fill you in on all the juicy details.  This date also marks the start of Joyce’s book, Ulysses, for which Barnacle was his muse, and Bloomsday, which is celebrated every year in Ireland to celebrate Joyce’s writing.   Though they were not married until much later in their relationship, they lived like a married couple and had two children together.

Don’t cry, Nora, when we reunite, I want your eyes to glow.  Take me in your arms, feel tenderness for me, and lead me right.  Look well for me, dear-have your hair clean and free of ashes, it’s not right to look slovenly at twenty-five young years!  Have something warm to eat ready for us, won’t you?  Let me feel happy from the moment I arrive, dearest.  I shall want a good cup of coffee in a nice little cup.  Have a salad for me, but don’t let onions or garlic into the house.  And, Nora, don’t, in your first words to me, mention money or debts, please.

James Joyce (often referred to as Jim) was a tall order if I do say so myself.  Like so many, he lived for his writing and was determined to make it big, no matter the cost.  Nora was a Saint in my opinion.  She endured moving around Europe with their two kids to accommodate his writing.  She dealt with his constant drinking and financial irresponsibility.  She stayed by his side through all of his eye surgeries and health issues.  She embraced the fame from his writing while managing her growing children. She struggled with her son’s marriage and her daughter’s mental illness. However, even though she and Joyce didn’t always see eye to eye, they had some fiery chemistry that was hard to deny and I believe they truly loved each other.

Before reading O’Connor’s book, I didn’t know much about James Joyce, let alone Nora Barnacle.  I even visited the James Joyce Centre in Dublin in my 20s and found his writing super boring.  I am quite a bit older now and would be willing to give his work another shot after reading O’Connor’s book.  She really brought to life  Nora and James’ relationship in her story. From Ireland to Trieste, to Zurich, to Paris, I felt like I traveled all over Europe with these two.  I particularly enjoyed bumping into Silvia Beach at her beloved bookstore, Shakespeare and Company in Paris.  Just saying.  O’Connor had me consumed with Nora and Jame’s life, beset with their family unit, and in awe of Nora’s constant strength and perseverance, even during the darkest of times. There is a zero percent chance that James Joyce could have reached literary success without Nora by his side. He was blessed to have her.

I loved, loved, loved this book to pieces. I literally gave it the biggest hug when I finished it.  My only regret is not reading it sooner.  It is everything and then some and will always have a permanent spot on my bookshelf.   I am now on the hunt to find out more about Nora Barnacle and her darling Jim Joyce.  Wish me luck.

P.S. Did I mention that I ran into your first wife Hadley in this book.  If I am not mistaken, it was at Peggy Guggenheim’s party.  I feel bad saying this, but the talk of your behavior wasn’t all that great that evening.  Nevertheless, it was a brief encounter so no need to dwell on the past.