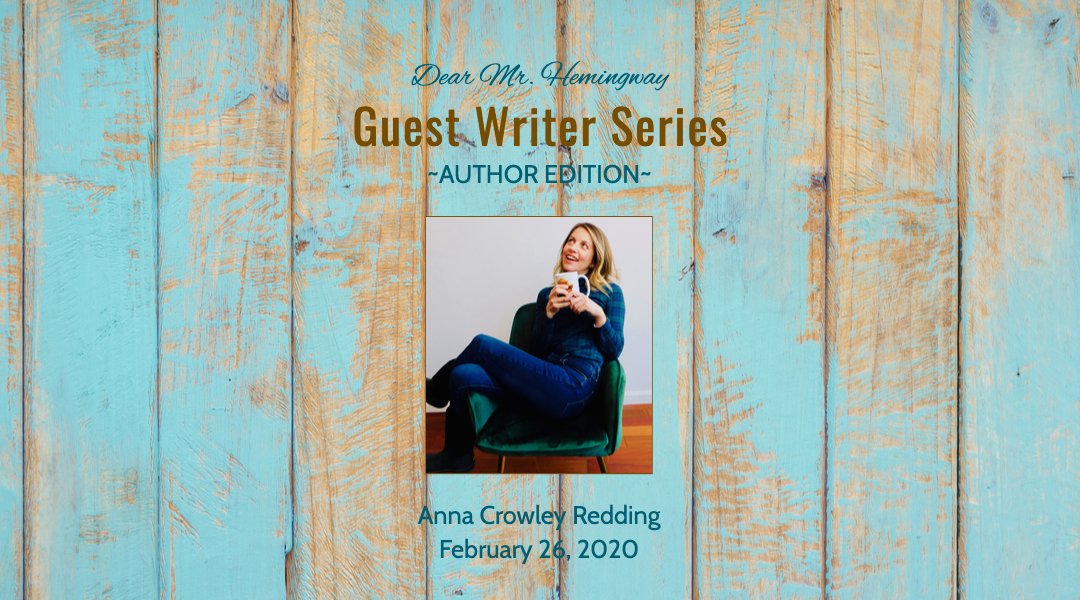 Happy Wednesday Book Friends! Not only are we halfway to the weekend, but it is Dear Mr. Hemingway Guest Writer day. Today, Author Anna Crowley Redding is on the blog and her letter to Mr. H. is quite magical. In case you didn’t know, Anna is the author of the YA book, Google It: A History in Google (Feiwel & Friends) and YA book, Elon Musk: A Mission to Save The World (Feiwel & Friends), which was named BEST STEM BOOK by the National Science Teacher Association for 2020. Her upcoming children’s book, Rescuing The Declaration of Independence (Harper Collins) has already received a glowing Kirkus Review. Before Anna began writing for children, she was an Emmy-Award winning (Yes, I said EMMY-AWARD 😯) investigative television reporter, anchor and journalist. Not only has she been recognized by the Associated Press for her reporting, but she was the recipient of multiple Edward R. Murrow awards. Impressive, right?

Though Anna loves her job as a children’s book author, her most beloved job in the whole world is being a mama to her two young boys and following in Jessica Fletcher’s footsteps (ie: Murder She Wrote) in her coastal Maine town. Only Anna has a lovely boyfriend us “marrieds” love to hear about (😂😂😂).

I know that you are going to enjoy getting to know Anna. And when it comes to her books, the proof is in the pudding!! I hope you adore Anna’s letter to Mr. H. I want to thank Anna from the bottom of my heart for contributing to this series. I am truly blessed to have her in my life (ummmm……forgot to mention that she is one of my close friends ❤️❤️).

For more information, take a peek at her website!

Write one true thing. That’s what you said. That’s how you said to start. And so if I’m being honest, I suffered through your books in junior high and high school. I craved independence and regularly slipped the ties to classics, to what was expected. It wasn’t until years and some trouble later, that I found myself living in Florence, Italy. Completely and absolutely in love with a place, a time, and all the magic it could hold.

And I would recount my tales to my stepdad on regular phone calls. And all of these conversations reminded him of something you’d written, during your own time in Europe, your own self-discovery in Paris and nearby, snowy mountains. It reminded him of your book, A Moveable Feast.  When I opened the cover of my copy, I found your truth and mine. And just as you, through your words, your writing, your thoughts, your presence in a Parisian cafe, just as you decided that you owned Paris and everything in it… well, in the same way, I owned Italy and everything in it. I owned every morsel of food, every sip of dark, creamy cappuccino, every rolled ‘’r’, even a kiss or two in the pouring rain in Piazza Signoria. Those tendrils, a deep love with a place and time, grew and wrapped themselves around my writing like a present, forever entwined.

And today… that moveable feast does not include a view of the Arno or a stroll across Ponte Vecchio. It’s more carpools, deadlines, little league sidelines, wild laughter with friends when we find time to sneak away from our responsibilities, and there was that kiss by the lighthouse hidden only by a blanket of fog! Things are more grown-up now (mostly) but all of it is still delicious–to be savored, and anchored with words.

It’s knowing that you are starring in your own story. It’s writing it down. It’s absorbing every bit of information about this world and your ever so slight, blink-and-it’s-gone life that you can muster. And it’s reading, reading to gather that moveable feast close. No, I cannot visit Gertrude Stein’s apartment as you did or hang out with James Joyce. But when I pick up a book…that’s how I gather a couple of female WWI spies around me. As the flames flicker behind me, they divulge every secret. It’s the sound of me saying “Yes, Girl, Yes!” As Bernadette descended into mid-life invisibility only to reinvent herself. It’s how I know the truth of fear, bravery, love, failure, loss, success, and boredom. Because these truths, whether written, lived, or read allow us to conduct our own moveable feast filled with just the perfect tales, toasts, and company for an afternoon by the fire.

P.S. If you’d like to check out the tales of other risk-takers, and rule breakers, I’ve got two books out and more on the way.

Google It: A History of Google (Honestly, Mr. H. there is some lock picking, some almost naming the company Backrub, and other hijinks) and Elon Musk: A Mission to Save the World (You’ll relate to Elon’s unshakeable curiosity and drive) and then coming this April, a forgotten tale of a man who saved the words that built America. I’m talking about The Declaration of Independence, the original Constitution, and more. And then there’s the one about the man who fought to keep tomatoes out of his clam chowder! Chowder Rules! is hitting bookstores in October 2020.

Click here to purchase Google It: A History of Google by Anna Crowley Redding

Click here to purchase Elon Musk: A Mission to Save the World by Anna Crowley Redding

Click here to purchase A Moveable Feast by Ernest Hemingway

Click here to read what I had to say to Mr. Hemingway about Google It: A History in Google

Click here to read what I had to say to Mr. Hemingway about Elon Musk: A Mission to Save The World